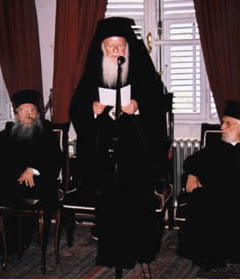 The HTSG Association was founded on July 31, 1952, with the wholehearted consent and support of Ecumenical Patriarch Athinagoras and the blessings of the Mother Church. Undoubtedly, this was directly linked to the reorganization of the operating system of the Theological School of Halki, at the decision of the Holy Synod of the Ecumenical Patriarchate, which had met with the approval of the Turkish Government, a year earlier, in October 1951.

Patriarch Athinagoras wanted to make the reorganization widely known in order to attract foreign students from sister Orthodox Churches; he wished for the Theological School to achieve recognition as an academic equivalent to other Orthodox or heterodox Theological Schools. Thus, for this purpose, he decided to mobilize all the School’s graduates across the world, particularly in Greece, many of which held positions of power in the administration of the Autocephalous Church of Greece, University Departments and public service sectors.

To that effect, in the summer of 1951 he inaugurated the holy pilgrimage of graduates to the Mother Theological School. The following year, on July 31, 1952, the HTSG Association was established. Aristotle Constantinides, a graduate of 1917 and one of the Association’s founding members and leaders recounts beautifully: «the birth of the Halki Theological School Graduates Association took place in 1952 at the Holy Theological School of Halki, during the annual celebration of the School Graduates’ Day, which was established by the late Ecumenical Patriarch Athinagoras in his desire to preserve the indissoluble spiritual ties between the graduates of the School, who were dispersed across the world, as it is well known, and to attract their continuous interest for their spiritual mother School, the only famous nursery of Orthodoxy, and more particularly of the Hierarchy of the Ecumenical Throne. »

At the meeting that purposely took place in the nothern part of the garden under the unforgettable tsikoudia, the enormous and perennial shadowy tree of the School, after several issues were discussed the idea for all fraternity brothers to be united, via the establishment of the HTSG Association was suggested. The purpose of such union would be the constant communication among all School fraternity brothers and efforts of all, clergy and laity, to support the School and Orthodoxy in general. The proposal came from Aristotle Constantinides and met with the inspiration of the Patriarch and the enthusiastic acceptance of all present fraternity brothers, resulting in the unanimous decision for the establishment of the HTSG Association.

As members of the HTSG Association were rightfully appointed all fraternity brothers, graduates of the School, but also non – graduates, clergy and laity alike, across the world who certainly straddled the doorstep of the School, as Patriarch Athinagoras said.

The constitution of the Association were drawn by its founding members in Athens, after its raison d’ être was ratified by the Ecumenical Patriarchate, and judicially approved by the Court of the First Instance of Athens, in June 1953; it began to operate as a recognized Association under the name “Halki Theological School Graduates.” The purposes of the establishment and operation of it, as listed in Article 2 of the constitution, are: a) the spiritual communication between its members, b) the promotion of the work of the Theological School of Halki, namely its service to the Ecumenical Patriarchate (Constantinople), the Orthodox Church as a whole, the Inter-Christian world, the Theological Letters and our pious Nation and c) the moral support to the Ecumenical Patriarchate, in its holy work and mission, in the inter-Orthodox and inter-Christian realm, as the Center of Orthodoxy.

In February 1989, the Association acquired a permanent privately owned housing, with the purchase of an apartment on 25, Archelaos Street, in Pangrati, Athens, which was modulated and shaped appropriately in order to accommodate the needs of the Fraternity. The purchase of said apartment was made possible thanks to the wholehearted financial contribution of its members.

The first Administrative Council of the Association began its activities, by directing its efforts toward every direction for the support and solidarity of the School in the implementation and success of its program, a goal at which the re-organization of its operating system aimed. This went into effect after the modification and revision of its Regulation, since the academic year of 1951, and was the beginning of a new period in the School’s course, the fourth in a row, since its formation in 1844.

These activities, however, were soon suspended due to adverse developments in the Greek-Turkish relations and especially after the sad and horrific events of September 6-7, 1955, the persecutions and pressures of the Turkish Government and the burdensome restrictions, this imposed against the Ecumenical Patriarchate, the Greeks of Constantinople and the Theological School, the operation of which it eventually suspended in 1971.

The Boards of Directors of the Association, before such adverse conditions and within the framework of existing possibilities and provisions of its constitution, assisted the battles of the Ecumenical Patriarchate for the re-opening of the School, with representations and resolutions of protest to the political world of the international Community, Theological Schools and other higher intellectual institutions, requesting their support for the safeguarding of the self-evident rights of man, the safe and free existence of both the Ecumenical Patriarchate, and the Theological School of Halki.