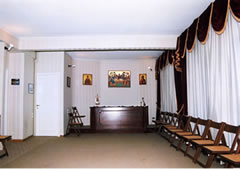 In February 1989, the Association acquired its permanent privately owned housing with the purchase of an apartment on 25, Archelaos Street in Pangrati, Athens, which was laid out and fashioned appropriately in order to serve the needs of the graduates of the Holy Theological School of Halki.

The purchase of said apartment was made possible thanks to the wholehearted financial contribution of its members.

The appeal for support of its Board of Directors to members across the world, although it did not have the expected effect in the beginning, with time and the continued appeals of the new Board of Directors of 1986, along with mobilizations toward every direction, gained momentum. The idea for the Association to acquire a housing, privately owned nonetheless, became part of the conscience of certain fraternity brothers, which expressed their interest in deed by supporting it to completion.

The first and great supporter and subscriber who fully welcomed the idea and the decision of the Board and immediately responded to its appeal, was the late Archbishop Iakovos (Koukouzis) of America of blessed memory along with the Board of Directors of the Association of the Halki Theologians in America, which was under his noble spiritual guidance; he offered the generous amount of 7,000,000 GRD.

Unreserved was the moral and material support of the late fraternity brothers, Patriarchs Dimitrios 1st of the Ecumenical Patriarchate and Parthenios 3rd of Alexandria, who also offered the amounts of 1,500,000 and 1,000,000 GRD, respectively. Certain other fraternity Hierarchs of the Ecumenical Throne and the Church of Greece, as well as fraternity clergy - and laymen from Greece and abroad also contributed to the project with their offers ranging from 20,000 to 200,000 GRD. Their Eminences Metropolitans Maximos of Stavroupolis and Philotheos of Ierapitna contributed the amount of 200,000 GRD, each.

His Eminence Metropolitan Nektarios of Leros and Kalimnos, a Metropolitan of the Throne, albeit a non-fraternity brother, contributed 500,000 GRD, half of which was money donated by the faithful throughout the churches of his Holy Metropolis and the other half by his venerable elderly mother. Likewise, the Holy Monastery of Toplos of the Holy Metropolis of Ierapitna and Seteia donated the amount of 200,000 GRD.

The house was bought in June 1988 against the amount of 6,900,000 GRD. The expenditure for its interior lay out, modulation, decoration and furnishings, according to the needs it would serve as the headquarters of the HTSG Association, reached the amount of 6,300,000 GRD not including the expenses for the special architectural study and monitoring of the project. The fraternity brother, architect Mr. Iakovos Hatziignatiou, a graduate of 1955, undertook the responsibility and supervision of this project with great diligence and dedication all through its completion. His support and offering was very valuable to the Association.

The Association’s Board of Directors, unanimously proclaimed His Eminence, late Archbishop Iakovos of America “Great Benefactor of the HTSG Association” and decided to hang his portrait in the reception area of its headquarters. The Board reached this decision, for it deeply appreciated the continuous support and solidarity, which this fraternity brother offered and continued to offer to the work of the Association and its Board of Directors with undiminished zeal; in particular, they were much appreciative of his undivided support and important financial contribution that enabled the acquisition of the Association’s own housing. The Board of Directors announced this decision to His Eminence by way of relevant correspondence.

The Association had the great joy and honor to welcome him to its headquarters while he was visiting Athens on November 7, 1990, on the occasion of the bestowal upon him of an honorary doctoral degree by the Faculty of Theology of the Theological School of the University of Athens. Gathered members of the Association together with families and friends, offered him a great heartfelt reception.