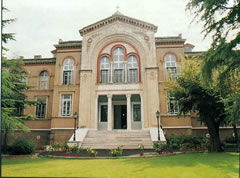 The HTSG Association, after the suspension of the operation of the Halki Theological School in 1971, shouldered the hard work of theological events through its graduates and members in general. To this end, in 1978, and despite the financial difficulties it was facing, it decided to issue a Yearbook, which was published in 1980.

The purpose of the publication, as recorded in the preamble of the Yearbook was to “give some simple and concrete examples of the ongoing ecclesiastical, scientific and other intellectual activity of the graduates of the School, which now belong to three or more generations, and are active in all widths and lengths of the Orthodox world, to maintain timeliness in the matter of the ongoing hardship of the School and to stimulate public interest for its need to exist in order to continue its age-old tradition and unique fruitfulness.” In conclusion, the wish was expressed for this publication of the graduates of Halki to continue as a periodical publication, which would advance the work of the School and contribute to the promotion of Orthodox Theology as well as the spiritual mission of the Church.

With the publication of this scientific volume, which promotes the spiritual and theological legacy of the Theological School of Halki in the theological world, the Association not only introduced its activities in the intellectual field, but also extinguished the burning passion of teachers of the School, particularly those of the fourth session of its operation, 1951 -1971, who had wished for the publication of a scientific Yearbook of the School, as witnessed by the archives and the Minutes of the Teachers’ Association.

So far six volumes have been issued and soon, within 2009, the seventh volume will follow. The Academy of Athens awarded the Association for its publishing work in December of 1994.