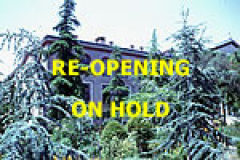 When the Ecumenical Patriarchate decided to establish the Theological School in Halki to serve as the religious staffing center of the Holy Great Mother Church of Christ in the middle of the 19th Century, in order to repulse the challenges posed by novel philosophical and religious movements and trends of the West, the selection of its scientific staff presented serious difficulties. A number of issues of high urgency made the theological staff selection imperative. Archimandrite Konstantinos Typaldos-Iakovatos, from Cephalonia, of remarkable theological and philosophical constitution and significant administrative experience took over the management of the School.

As the primary objective of the School was the training of clergy for the preaching of the Divine Word in the provinces of the Ecumenical Throne in order to protect the Orthodox flock of heretical teachings, special emphasis was placed on the preaching Theology and the learning of foreign languages. Thus, on 14 July 1848, the first graduates of the School are nominated as Teachers of Orthodox Theology.

The variables in post-modern philosophical trends and currents of the West and the political circumstances of the developments in the context of the conflict between East and West were decisive factors for the structural and operating reorganization of the School and the rewriting of its curriculum. As a result, and by extension, there was a need for new teaching staff, at a time when the School’s budget was not enough to cover even its existing operating needs.

During the operation of the School for more than a century, important personalities of the Theological scientific research sealed the School’s history with their presence and ministry, as well as the course of the Ecumenical Throne through the theological events of 150 years since the establishment of the School.

Of particular interest is the 3rd period due to the difficulties faced by the Ecumenical Patriarchate in the reorganization of the School in order to meet the challenges and effects of rapid developments, both at political and inter-Christian level, in an effort to realize its universal mission.

Following the approval on the part of the Turkish government (1929-1930) for the School to operate on the basis of a seven-year course of studies, the Trusteeship needed to fill the vacant teaching positions. The refusal of the authorities for the recruitment of teachers of foreign nationality imposed the solution of co-teaching, which, of course, did not help solve the problem. However, thanks to the enthusiasm, dedication and God-inspired zeal of the teachers, serious difficulties in the implementation of the curriculum were overcome. Of course, we should not ignore the understandable negative impact in the areas of material supply and teaching methodology that the above options presented in addressing the problem.

The need to fill the vacancies does not exhaust itself with the effective implementation and operation of the curriculum, but extends to the role that the members of the Association of Teachers of the Theological School are called to play. Since the beginning of the fourth period in 1951, staff vacancies in several cognitive subjects were filled with the appointment of new teachers, scholars of the School, returning from post-graduate studies abroad.

The confrontation of issues concerning the Church that are of varied character, intensity and scale presupposed the thorough study and theological support thereof. The governing Church occasionally referred emerging issues for theological treatment and advice, with clear instructions and guidance, to the Association of Teachers.

While issues of faith, administration and inter-faith relations of the Church present remarkable growth and complexity, adverse historical developments in the geopolitical function of the center of Orthodoxy shrink the dynamics of its activity.

The role of members of the faculty of the School is essential in organizing all-Orthodox conferences to promote important theological dialogues in addressing religious schisms and to prepare for the Holy and Great Synod, for they are called, not only to take part in the systematic preparation thereof (studies, presentations), but to also support, with their active participation in the above activities the positions held by the Ecumenical Patriarchate as representatives thereof. Without doubt, the multilateral and multifaceted contribution of the School Teachers in supporting historical choices in the course of Orthodoxy and their contributions in the inter-Christian area turned them into dynamic spiritual workers in the battles of the Great Church of Christ, not just at the level of its ecumenical activity, but also in their dealings with the immediate administrative and spiritual needs of the Holy Archdiocese of Constantinople. Teachers of the School participated in synodical committees, constituted an advisory body on religious and theological issues of the Patriarchate and had their own contribution to the ministry of the Gospel in the center of Orthodoxy.

The Halki Theological School, along with the problem of staffing its teaching workforce, was asked to face the issue of its academic equivalency against respective academic university schools abroad. The School was recognized by the Ministry of Education of Turkey as a post-second grade vocational school. The refusal of the Turkish government to grant academic equivalence, with the invocation of pretentious constitutional grounds, even after the amendment of the relevant article of the Constitution during the 1960’s, which allowed the operation of private universities, did not affect the international academic status and prestige of the School.

The fourth period of the operation of the Halki Theological School was brilliant, because it succeeded in showing off the enviable multilevel dynamics of its own identity. It was distinguished for its valuable contribution, not only in the field of theological research, but also for its Orthodox testimony around the world as a deacon of the universality of the venerable center of Orthodoxy. In particular, it became a center for the spiritual mission and work of the Ecumenical Patriarchate. Certainly, one should not overlook the fact that in the context of favorable historical times during the fourth period, significant ecclesiastical personalities contributed to the international scientific and intellectual luster of the School from 1951 to 1971 by divine providence. That is why the global academic community, recognizing its work and offering, accepted its alumni, not only in the universities of Europe, U.S. and Australia for postgraduate studies, but even offered them the ability to take faculty positions in Theological Schools in Greece and abroad.

Unfortunately, the School was caught in the midst of strenuous relations between Greece and Turkey on account of the Cyprus problem and turmoil in the political arena in Turkey. As a result, the Turkish Government closed the School in 1971 arguing that the Constitution of the country did not allow the operation of private universities, although Turkey never recognized the school as an institution of higher education. It was an act of wider political expediency in a climate of adverse fluctuations in the relations between Greece and Turkey.

This of course constitutes a flagrant violation of human freedom and is a deprivation of the self-evident right of man to access instructional goods for the constitution, growth and cultivation of his own identity, a right of each citizen of every well-governed state. The international community has unanimously denounced this violation and Turkey has been constantly summoned for violations of human rights by international organizations.

From his election to date, Ecumenical Patriarch Bartholomew has engaged in a multi-level fight for the lifting of the unjust decision by the Turkish authorities; in his efforts he has the vigorous and full support of heads of state, parliaments thereof and international organizations.