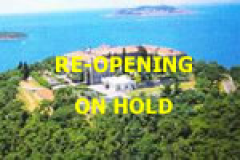 The history of the School is divided into four periods, which are defined by variations of its organizational structure and operation. These periods are:

The operation of the School in these four periods was governed by specific Regulations, which were prepared by the Association of Teachers in collaboration with the Trustees of the School and was ratified by the Holy Synod of the Ecumenical Patriarchate. From 1844 until 1951, a total of seven Regulations were published.

The Halki Theological School, the highest educational establishment of the Ecumenical Patriarchate, is subject to the supervision and control of the Primate of Orthodoxy and the Holy and Sacred Synod around him. A special body under the name “Trusteeship of the Holy Theological School of Halki”, whose Hierarch members are appointed by the Holy Synod, is entrusted with the School’s supervision. The responsibilities of the Trusteeship pertain to economic and organizational matters. The Trusteeship collaborates with the Scholarch and the Teachers’ Association.

A clergyman professor runs the School and bears the title “Scholarch.” He is the permanent ex officio president of the Teachers’ Association and abbot of the peculiar monastic brotherhood of the Monastery of the Holy Trinity, which is comprised by the students of the School. It is important to note, that the terms that Scholarchs served function as points of reference in the study of the history of the School and for the recording of its course. The choice of this criterion for the narration of the life and activity of the School owes its merit to two factors: a) Scholarchs were distinct church personalities and their vision was the ministry of the Great Church of Christ, and b) their firm belief that the future and the course of the Ecumenical Throne was unbreakably related to the dynamic operation of the School as an intellectual incubator for the preparation of its cadres.

The Secretariat of the School operated under the supervision of a professor of the School appointed by the Scholarch. To meet the operating needs of the institution and implement the relevant regulations, a graduate of the School, usually a clergyman, is appointed as a “Trustee.”